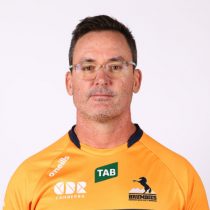 Dan McKellar grew up in Burdekin in North Queensland and was introduced to rugby at Townsville Grammar School. He played first-grade club rugby at an early age and as a teenager he helped the Burdekin Canetoads win the Townsville premiership in 1994

A powerful loosehead prop, McKellar played more than 150 premier grade games over a decade at Souths Rugby Club in Brisbane, winning a premiership in 2000.
He was a member of the Queensland Reds Super Rugby squad in 2005/06 and had stints playing overseas in Scotland and Ireland. McKella started coaching at Wicklow in Dublin, Ireland.
He was playing club rugby and acting as his side’s assistant coach in 2001 and took over the main player-coach role from 2002 to 2005

McKellar returned to Australia and was the assistant coach at Souths Rugby Club in Brisbane in 2007 and took over as the head coach from 2008 to 2010. He was appointed as coaching director and head coach of the Tuggeranong Vikings Rugby Club in Canberra for the 2011 and 2012 seasons winning back to back premierships in premier grade.He also set up the professional rugby academy at the Vikings Club.

In February 2013, McKellar moved to Japan to take up a position as forwards coach of Top League team NTT Docomo. McKellar returned to Canberra to sign with the Brumbies as the club’s defence and skills coach for the 2014 Super Rugby season. After the launch of the National Rugby Championship, he was appointed as head coach of the University of Canberra Vikings team to play in the new competition.

In May 2017 it was announced that Mckellar would take over from Steven Larkham as the Brumbies head coach for the 2018 Super Rugby.