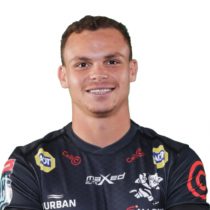 A pinpoint kicker and deadly attacker, Curwin Bosch has been tipped as one of the next big things in World Rugby.

In 2014 he was selected in the South African Schoolboys team, despite being a year younger than most of his teammates, that played against France, Wales, and England.

In 2015 he was once again selected for the SA Schoolboys side to face the same opposition.

He moved to Durban to join the Sharks academy for the 2016 season and was included in the South Africa Under-20 training squad for the 2016 World Rugby Under 20 Championship tournament.

Shortly after returning to South Africa, Bosch made his Super Rugby debut from the bench in the Sharks round 16 clash with the Cheetahs. He made another 2 appearances for the Sharks before the end of the season.

In May 2017 Bosch was named in the South African U20 squad for the Junoir World Championship in Georgia.

He starred for the U20s and returned to the Sharks in fine form and earned a spot in the Springbok squad for the 2017 Rugby Championship.

He made his test debut off the bench against Argentina but did not make another appearance for the test side in 2017 after the coaching staff believed that he was not ready for test rugby then.

He finished the Super Rugby season as the competition's 2nd highest scorer with 151 points from his 13 games.

His ability to slot long-range penalties earned him a Springboks recall in May 2018.