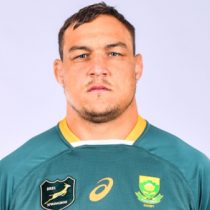 Having played at tighthead prop at school and most of his professional rugby at loosehead, Oosthuizen is a valuable asset on the bench and has the potential to develop into a world-class performer.

He carries the ball ferociously and gets over the gain line regularly but also poses a threat on the ground where he secures a lot of turnovers.

After 7 years with the Cheetahs, Oosthuizen joined The Sharks in 2015 on a 4-year deal.

He suffered heavily in 2015 with injuries but despite that, he was included in the Springboks RWC Squad.

Oosthuizen entered the 2017 Super Rugby season with 88 caps under his belt and 45 points scored since his debut in 2010.

He started the 2017 Super Rugby season well and was recalled into the Springbok squad ahead of the June internationals against France.

In May 2019, he signed a three-year contract with the Sale Sharks.