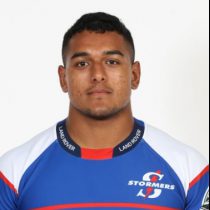 Solomon was included in Western Province's Currie Cup squad for the 2016 Currie Cup Premier Division and was named on the bench for their opening match of the season against the Blue Bulls.

He made his Currie Cup debut by coming on for the final 25 minutes of a 26–45 defeat, however, Solomon suffered an ankle injury during the match and was ruled out for the remainder of the season.

Solomon has been included in the Stormers wider training squad for the 2018 Super Rugby season.