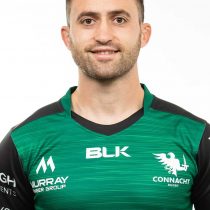 Having already played for the province's second-tier side, the Connacht Eagles, Blade joined Connacht's academy at the beginning of the 2013/14 season.

In January 2015, it was announced that Blade had signed his first full contract with Connacht, a deal that saw him join the senior team ahead of the 2015–16 season and ran until summer 2017.

He extended his stay at the region in October 2016 for a further 1 year.

Blade went into the 2018/19 Pro14 season having played 48 times in the competition for his Province.

In January 2019, he was included in the senior Ireland squad for the 2019 Six Nations tournament.

February 2020 saw him sign a new two-year contract with Connacht, which will see remain at the Sportsground until the summer of 2022.