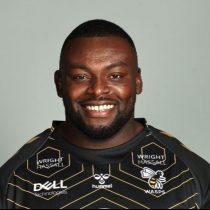 Biyi Also is a tighthead prop, who has played for the England U18s & U20s, came through the Saracens Academy, made his Premiership debut against Harlequins at Wembley in 2015.

Alo caught the eye of Worcester Warriors and switched in 2016, where he made 30 overall appearances. In January 2017, the giant tighthead prop signed a deal to remain at Sixways just after 9 appearances for the club.

In April 2018, Alo made a switch to France and signed a deal with Angouléme.

Alo then made the decision to return to England after signing a deal with Coventry Rugby in October 2018, where he made 6 appearances.

In February 2022, the Loughborough University graduate signed a new deal with Wasps. He is approaching his 50th career Premiership appearance, having joined Wasps initially as injury cover from Coventry Rugby during the 2018/19 campaign.

During the 2021/22, Alo put in an eye-catching performance against Leicester Tigers, before crossing for a try against Toulouse a week later. The tighthead prop also scored a 5-pointer against Bath.