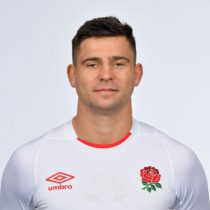 Son of former scrum-half Nick and brother to hooker Tom, Leicester Tigers is in the blood of scrum-half Ben Youngs.

The scrumhalf's quick delivery served him well as he made a big impact early on in his England career. He is the youngest player to represent the Tigers in the Premiership and is the son of former England international Nick Youngs.

His fast accurate pass and eye for the gap are some of his best assets.

Players’ Player of the Year, Supporters’ Young Player of the Year and RPA Young Player in 2009/10, he ended that season with a try in the Premiership Final win over Saracens. After scoring two tries in his first appearance at the World Junior Championships with England Under-20s in 2008, he remained in the squad that reached the Final in Japan a year later and made his first appearance at Saxons level in January 2010.

Another memorable milestone came when he kicked 17 points in the historic win over world champions South Africa at Welford Road in October 2009.

Ben made his Test debut of the bench as an emergency wing in a win over Scotland in 2010 and was ever-present at scrum-half in the Six Nations title triumph a year later, while also playing in further Championship wins in 2016 and 2017.

He marked his 100th appearance with a try in the win at Sale Sharks in October 2012 and then saw an 80-metre solo try at Bath voted Try of the Year at the RPA Awards.

Youngs played in his fifth Premiership Final in 2013 and collected a fourth league title of his career before joining brother Tom and four of their clubmates on the victorious British & Irish Lions tour to Australia. Having been selected to tour Australia with the Lions in 2013, Youngs started the first two tests, scoring twice; against the Reds & Rebels.

By 2014/15 he was leading Tigers as skipper in the absence of club captain Ed Slater and passing 50 Tests with England before playing in the Grand Slam triumph a year later. He was also a central figure in England’s high tempo game that secured the Wallaby whitewash at Sydney. Ben also produced a sumptuous performance in the 37-21 victory over South Africa in the Old Mutual Wealth Series at Twickenham in November.

Selected for a second Lions tour in the summer of 2017, Ben withdrew for family reasons but played his part as Tigers reached the knockout stages of the league season yet again.

In January 2018, he signed a new deal with Leicester Tigers having made over 200 appearances over the last decade that he has been at the club.

By 2019 he had become England’s most-capped scrum-half in the build-up to another World Cup campaign. He took his test cap tally to 95 as he helped England reach the Rugby World Cup Final.

Youngs earned his 100th test cap against Ireland in round three of the 2020 Six Nations Youngs.

Having earned 100 tests, he recommitted to Leicester Tigers by signing a new deal. Youngs has made 244 appearances for Tigers since his debut as a 17-year-old.

In October 2020, he became just the second England player to reach 100 test caps after Jason Leonard. He won his 100th cap in a Six Nations clash against Italy.