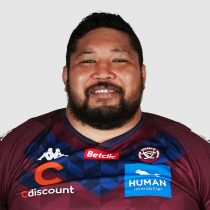 Ben Tameifuna quickly made his mark with his strong scrummaging skills for such a young player and was nominated for Chiefs Rookie of the Year in 2012. The former halfback was part of the New Zealand Under 20 IRB Junior World Championship winning team and has proven he is a big defender who is strong with the ball in hand. Tameifuna played ITM Cup for Hawke’s Bay and represented New Zealand Schools in 2009.

Tameifuna continued to grow his reputation as a powerful scrummager and a talented ball carrier with the Chiefs and was included in the New Zealand training camp ahead of the three-Test against Ireland. He was not included in the New Zealand squad for the 2015 Rugby World Cup and was still uncapped by the time he joined top 14 side Racing 92 in 2015.

In 2016 he made his debut for Tonga on the European tour.

In December 2017 Tameifuna signed a contract extension with Racing 92 that will see him stay at the Paris based side until at least 2020.

Tameifuna took his test cap tally to 13 during the Rugby World Cup in Japan with Tonga but return to Paris 15kgs overweight and did represent the club until he dropped the excess weight.

In May 2020, he signed a deal with Bordeaux with his contract with Racing 92 coming to an end.