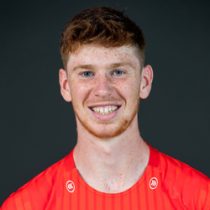 A former Glenstal Abbey captain, Ben Healy guided the side to their first ever Clayton Hotels Munster Schools Senior Cup triumph in 2018 and joined the Munster Academy in the summer of 2018.

Prior to joining the Academy, the out-half represented Munster at U18, U19 and U20 level and also played for the Ireland U18s and U19s. A strong start to his first season in the Academy saw Healy make five appearances and score 19 points for Munster A in the Celtic Cup.

Healy broke into the Munster senior squad in 2019 when he made his Guinness PRO14 debut against Edinburgh at Irish Independent Park in November 2019. His European debut two months later against Ospreys in January 2020.

By June 2020, Healy has made three appearances for the senior squad scoring 17 points.