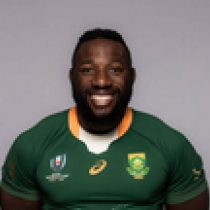 The Zimbabwean-born Mtawarira joined up with the Sharks after school where he was trialled at lock, flank, and even at hooker before Sharks coach Dick Muir eventually convinced him to concentrate on loosehead prop. A move that would see Mtawarira become of one the greatest front rowers in Springbok history.

In 2007 he made his Super Rugby debut at 21 when he came off the bench in the final at Kings Park.

Known for his immense physicality, the popular Mtawarira’s nickname of “Beast” can be heard called out by any crowd in South Africa and around the world whenever he touches the ball.

He made his test debut in the starting line up against Wales in 2008 and has been a mainstay in both the Springbok and Sharks squads since.

The powerful front rower was immense during the Springboks victorious test series against the British and Irish Lions in 2009, a performance that famously ended the career of veteran Phil Vickery.

In January 2010, the South African national assembly sports committee questioned the legality of fielding a Zimbabwean in the national side. He was dropped for the June Tests and there was even talk of him being deported, fortunately, he managed to obtain South African citizenship and was back in the Bok set-up later that season.

Mtawarira began to suffer from heart palpitations, the situation deteriorated in November 2012 when he was rushed to a Dublin hospital on the eve of a Test against Ireland and then ruled out for the remainder of the three-Test tour.

He underwent a procedure that saw an electric current passing through his heart to correct the arrhythmia, leading to his teammates calling him Iron Man.

'The Beast' earned his 80th cap after being named in the starting line-up for the August 27, 2016 return Rugby Championship clash with Argentina, equalling two-time World Cup winner Os du Randt’s record as the most-capped prop for the Springboks. What’s more, he and the Du Plessis brothers hold the South African record for the most Tests as a front-row combination

Mtawarira is the most capped Springbok prop and made his 107th appearance against the All Blacks in the final Rugby Championship game of 2018. Having made the squad to go to Japan for the 2019 RWC the Beast was unmovable and was instrumental in the Springboks 3rd World Cup win.

He retired from international rugby after the tournament. At the time he was just 1 of 4 props to start 100 test matches.

Following his international retirement, he announced his departure from the Sharks having made his Currie Cup debut in 2006 and Super Rugby debut in 2007.

In his 117 games for the Springboks he walked away with the following titles: