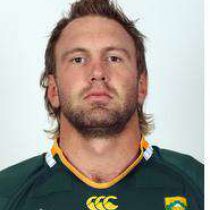 Having played under the shadow of Victor Matfield for so many years the giant 2.07 metre Stormers lock is poised to make his mark at Test level.

An intimidating presence in the line-out, he can also be a dangerous runner in the loose and has remarkable pace and ball-skills which make him threatening when put in space.

Bekker was a Super 14 Rugby Player of the Year nominee in 2008, before agreeing to a move to Japanese club Kobelco Steelers.

He has made 42 appearances for the Japanese side, scoring 70 points as he heads into the new season.

In January 2018 Bekker played his final match for Kobelco Steelers before announcing his retirement.