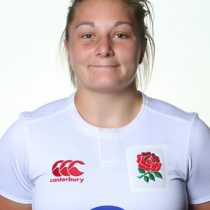 Amy played for Cleve, Lichfield, Bulls, and Feilding High School in New Zealand where she captained them to an amazing 53 wins in 53 matches in 2012 before returning to Lichfield.

Ipswich-born Amy is studying for a BSc in Sports Science at Loughborough University.

Her playing days in the land of the Black Ferns including being invited to join a national training camp but from the age of 10 she always dreamt of wearing an England shirt. So when the chance came to moved back home for higher education she grabbed it.

She won the European Championship with England U18 Sevens and also has also figured in the U20s Sevens.

Her 11th Test cap was against Ireland at Twickenham in February 2017. Her powerful carry helped to create England’s second try from Abbie Scott in a 13-9 victory.

Amy scored her maiden try against Canada in the 2015 Rugby Super Series at Edmonton and made two more touchdowns in this year’s tournament when England beat the United States 39-13 in the final match at Salt Lake City. Her fourth try was in the 10-5 win over France in November and her fifth from a driving maul against Canada at Twickenham later that month.

She played her club rugby for Lichfield and has won 45 caps for her country.

Amy was also named in England's squad for the 2017 Women's World Cup.

In July, she signed a deal with Harlequins Women.