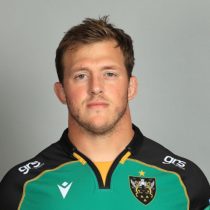 Born in Kettering, England, in February of 1990, Waller plies his trade as a loosehead prop. A product of the Northampton Saints academy, Waller made his debut for the senior club side in 2009 and has already amassed over 50 caps in his fledgling career.

Young Player of the season in 2012, Alex is the only player to appear in 100 consecutive Premiership games having reached the landmark against Bath during 2015/16. In total, Alex has played in 146 consecutive Premiership and European matches, stretching back to the 2011 Heineken Cup final and including Saints’ cup double in 2014

Alex has also played at international level, making his debut for the England Saxons against Irish Wolfhounds and earning his second cap the following week against Scotland A. This call up was his first inclusion in any of England’s representative sides.

Following his match-winning antics in the Premiership final, Alex joined up with the senior England squad for their three-Test tour of New Zealand that summer. He played against the Crusaders alongside fellow Saints Ben Foden, Lee Dickson and Stephen Myler.

November 2017 saw him sign a new deal at Northampton Saints until 2021, having made over 200 appearances for the side.

In September 2019, Waller was named co-captain of the Saints squad for the 2019/20 season along side Teimana Harrison.

In November 2020, he was reinstated as co-captain of Saints for the 2020/21 season alongside Lewis Ludlam.