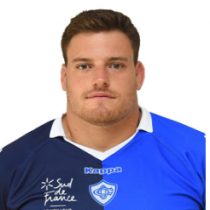 Tichit started his Top 14 career with US Oyonnax, signing a 2 year deal in 2008.

Tichit become a regular in the Oyonnax side and spent 7 years at the club making over 100 appearances for the side.

After his deal expired at the end of the 2014-15 season he signed with Top 14 side Castres.

In 2015 he received his first call-up to the French Barbarians side that traveled to Argentina.

Tichit has since been a consistent performer for Castres and enters his 3rd season with club ahead of the 2017/18 season.

In November 2017 he was named in the French Barbarians squad to face the Maori All Blacks.