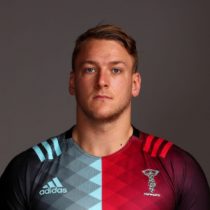 A bullish and incredibly talented back-rower, Alex Dombrandt had not been on anyone’s radar as he came through the school ranks at John Fisher in Purley, turning out for his local club, Warlingham, sometimes as a fly-half.

He went on to represent Cardiff Met while at the Cardiff Blues academy and during his time at the club, Dombrandt had his jaw broken twice due to on-field fights and came close to giving up on rugby.

He was convinced to continue playing, he was a regular member of the Wales U20 team throughout the 2017 junior Six Nations and turned down an offer to join Cardiff Blues.

In February 2018 the Harlequins announced Dombrandt's signature for the following season.

He quickly impressed and enjoyed a stellar debut season for the Harlequins, and on June 2nd 2019 he played for England, playing in a non-cap match against the Barbarians, in which he scored two tries.

In June 2019 he was one of four uncapped players named in England's preliminary World Cup training squad. The following month, he was recalled to the England training squad to replace injured Brad Shields. He failed to make an appearance but earned another squad call up ahead of the Barbarians and final round of the Six Nations in 2020.