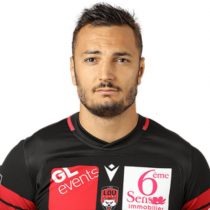 Bruni has enjoyed a decorated rugby career to date, 10 seasons at Toulon tends to help most players acquire silverware.

Bruni made the move to Lyon for the 2016-17 season and lined out on 15 occasions for the club, scoring one try in his first campaign with the club.

Bruni didn't feature in Lyon's 2018/19 Champions Cup season but did feature sporadically during the Top 14 season.