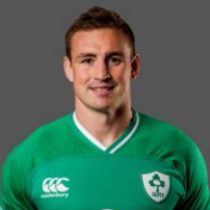 Munster Rugby Academy graduate, flanker Tommy O'Donnell has become a regular member of the Munster squad and has been a senior contracted player since the 2009/10 season.

O'Donnell began playing rugby for Clanwilliam at an underage level, before progressing to senior level. He also played for East Munster and Irish Youths whilst at Clanwilliam. O'Donnell made his Munster debut against Scarlets on 22 September 2007, during a Magners League fixture.

O'Donnell has been capped for Ireland at U-18 and U-20 grades and was part of the U-20 Grand Slam winning team in 2007. He was part of the historic Munster team that beat Australia 15–6 at Thomond Park on 16 November 2010 and made his Heineken Cup debut off the bench during Munster's 19–13 victory against Scarlets on 18 December 2011.

He signed a new two-year contract with Munster in March 2012. His form during the 2012/13 season saw him receive his first senior test call-up on 21 January 2013, when he was drafted into Ireland's 2013 Six Nations Championship training squad. He didn't make his test debut during the Six Nations but did feature for the Ireland Wolfhounds in January 2013, starting in the friendly against England Saxons.

He was named Munster Player of the Year for the 2012–13 season with his test debut following against USA in June. He made his first start for Ireland against Canada on 15 June 2013, also scoring his first try for Ireland in the game. O'Donnell signed a new contract with Munster in November 2013 which will see him remain with the province until June 2016 and he made his return from a knee injury sustained in September 2013 for Munster A on 6 December 2013.

O'Donnell was named in the 45-man training squad for the 2015 Rugby World Cup but a dislocated hip ruled him out of the Rugby World Cup in England. In December 2015, O'Donnell signed a three-year contract with Munster and made his return from the injury he sustained during the World Cup with Ireland, coming off the bench against Leinster during a 2015–16 Pro12 game.

He returned to the Ireland squad for the 2016 Six Nations and was retained in the squad until another injury in 2017. In November 2016, O'Donnell captained Munster for the first time and led them to a historic 27–14 win against the Māori All Blacks. He won his 150th cap for Munster on 21 October 2017, doing so in the 2017–18 European Rugby Champions Cup fixture against Racing 92.

O'Donnell made his return from a shoulder injury sustained in early November 2017 on 8 December 2017, playing the full 80 minutes for Munster A in their 2017–18 British and Irish Cup defeat at the hands of Bedford Blues. However, O'Donnell suffered a recurrence of the shoulder injury during Munster's 2017–18 Pro14 round 18 win against Scarlets which subsequently required surgery, ruling him out for the remainder of the 2017–18 season.

A superb start to the 2018/19 season saw O'Donnell score three tries in eight appearances and sign a contract extension until June 2021. Ankle and shoulder injuries hampered his season but O'Donnell returned to fitness and was named in the Ireland training squad ahead of the 2019 Rugby World Cup.

He made his 13 appearances for Ireland in the build-up to the Rugby World Cup but again narrowly missed out on a place in the squad. By June 2020, Tommy O'Donnell has 177 Munster caps scoring 20 tries.