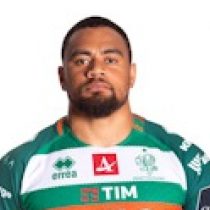 A hard ball-carrying loose forward Toa Halafihi started his professional career in the 2014 ITM Cup when he represented Taranaki.

He slowly grew as a player and fine-tuned his skill before being called up into the Hurricanes Super Rugby squad ahead of the 2017 Super Rugby season.

Toa played twice for the Hurricanes during the 2017 Super Rugby season and represented Taranaki in the 2017 Mitre 10 Cup campaign.

In October 2017, he signed a deal with Top 14 side Lyon as a medical joker for Carl Fearns. Halafihi joined the side following the conclusion of the Mitre 10 Cup.

He made 12 appearances for Lyon that made the semi-finals of the Top14.

He built on his impressive form for Taranaki in 2017 and his time with Lyon as he returned to Taranaki for the 2018 Mitre 10 Cup.

Halafihi signed a deal with Benetton Treviso in December 2018.