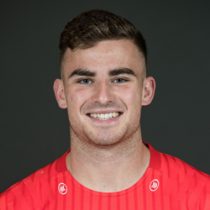 Shane made his competitive debut for Munster in 2018, starting in the provinces' opening 2018/19 Pro14 fixture against Cheetahs.