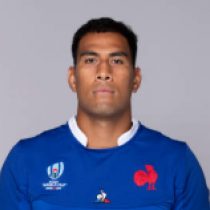 The massive second-rower began his professional career with CA Brive before moving to Perpignan in the Top 14. He made his international debut against Australia in the autumn internationals.

In 2012 he was called up to the French National squad for the Autumn internationals and in 2014 he made the move to Clermont. Played for Clermont in two finals in 2015 losing to Toulon in the Champions Cup.

After consistent performances, he was called into the French national team to prepare for the 2016 November Tests.

In January 2017, he was named in the France squad for the Six Nations tournament, with his impressive performances earning him a call-up to the 2018 Six Nations.

Vahaamahina, named for the 2019 Six Nations has had 16 previous 6 Nations appearances. He featured in 4 of France's Six Nations' match.

He was included in France's Rugby World Cup squad and took his test cap tally to 46 in France's final game of the tournament.

Vahaamahina was infamously shown a straight red card in the quarter-final against Wales in what proved to be his final test match as he announced his retirement from test rugby.