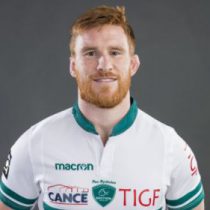 The Scottish born flanker spent his formative years in the Ulster academy before leaving and joining English side The Rotherham Titans.

When Rotherham’s regular captain was absent, Dougall, despite his young age of 21, captained the side. Dougall, who has represented Ireland at under 18 level, moved to Munster in 2012 on the back of impressive performances for Rotherham.

The former Ulster academy prospect spent three years at Munster before making the switch to Pau in the Top 14 in 2015.