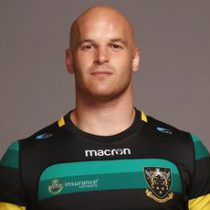 Dickinson had been highly rated by regular viewers of the English Championship for several years before being picked up by Northampton in 2012, where he featured on 94 occasions for the Franklin’s Gardens outfit and also captained their Wanderers to the A League Premiership Title.

Northampton Saints confirmed that Dickinson will be leaving the club at the end of the 2016/17 campaign.

The second-row/back-rower joined Ealing Trailfinders mid-way through the 2017/18 campaign, and made a huge impact in his seven appearances which ended in the British & Irish Cup triumph.

Before his time at the Saints he had a stint at Rotherham Titans, taking to the field over 60 times in the Championship as well as also representing England Saxons twice.