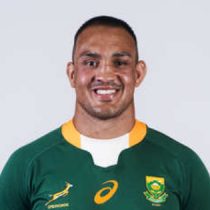 An exceptionally talented youngster, Salmaan Moerat has been tipped for great thing from a young age in the South African Rugby circles.

Moerat comes from well-known rugby family in the Western Cape with his family having started the Vineyards RFC. His father then represented SARU during the apartheid era.

Salmaan Moerat started his representative rugby at 13 when he represented Boland at the U13 Craven Week, before attending Paarl Boys' High and representing Western Province at under 16 and under 18 levels.

His strong showing and excellent leadership qualities did not go unnoticed as he then became the captain of the SA Schools team and led them to remain unbeaten in the Under 19 International Series in Cape Town.

After school Moerat joined the Western Province Academy and was selected in the Springbok U20s in 2016 and 2017.

Ahead of the 2021 November tour to Europe Moerat was selected in the Springbok squad. In February 2022, Moerat signed a new deal with the Stormers until 2025, turning down multiple offers from clubs in Europe.