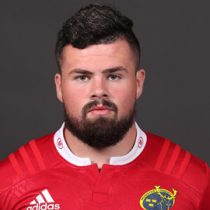 Burke played for the Munster Under 19s in 2012/13 and progressed to the Under 20 side the following year.

The prop also has international honours having represented Ireland at Under 19 level and he was called into the Irish under-age National Training Camp in October 2013.

Made his B&I Cup debut for Munster A v Leinster A in Donnybrook, April 2014.

Played in every game of the Ireland Under-20s' Six Nations campaign in 2014.

Part of the Cork Con senior team that won the 2014 Bateman Cup.

Included in the Ireland U20 squad for the 2014 IRB Junior World Championship in New Zealand.

Made three B&I Cup appearances in 2014/15 but two ankle operations saw him miss much of the season.

Made his senior debut in pre-season action against Grenoble at Thomond Park in August 2015.

Finished out the 2015/16 season with three B&I Cup appearances and had his time in the Academy extended by one year after a series of injuries hampered his development.

In May 2017, Nottingham Rugby announced the signing of tighthead prop Burke, from Munster, on a one-year deal.