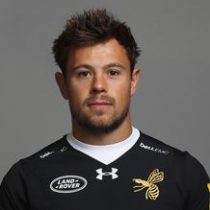 He signed for Newcastle Falcons in 2008 before signing for Sale in 2010.

Miller was the Premiership's top try scorer in the 2011-12 season and was a standout performer for Sale Sharks during his four seasons there. He made more than 100 appearances for the club.

The 27-year-old fullback has represented England at U16, U18 and U20 levels and played for England Saxons in their games against Irish Wolfhounds and Scotland A two seasons ago.