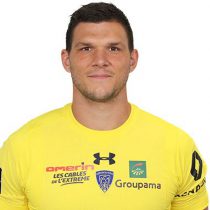 Playing for Lyon over 60 times from 2008-13, Grosso made the move to Castres in 2013/14 season. With well over 30 tries for his clubs over the past 5 years Remy Grosso earned a suprise call up into the French 2015 RWC squad to cover for the injured Huget who went down in the opening game against Italy. Scored a try in his only appearance at Canada at the 2015 RWC.


In February 2017, Grosso joined Clermont as a medical joker for the injured Wesley Fofana. He had played in the Champions Cup for Castres during the 2016/17 season, ruling him out for Clermont. Grosso had committed to a three-year deal with Castres before joining Clermont a short-term deal.