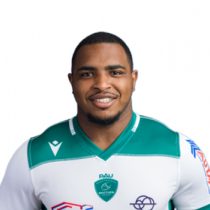 A physically imposing front rower, Rayne Barka was a wrestler in his youth before trying his hand at rugby, experimenting with several positions before settling at hooker.

Now a powerful hooker Barka's experience with wrestling has certainly aided him in the dark arts of the front row as he rose through the ranks in the Agen academy before signing for Pau in 2018 and making his debut for the club the following year.

His form for the Pau Academy saw him being selected in the France squad for the 2019 U20 Six Nations and where he featured regularly as the side finished second overall.

He was once again included in the u20 squad for the U20 World Championship. He came off the bench in the opening game of the competition to score his side's last try while also coming off the bench as France claimed the title beating Australia in the final.

Barka is starting to make his impact felt in the Pau squad having made his debut during the 2018/19 season and adding three appearances before the 2019/20 season was called off.