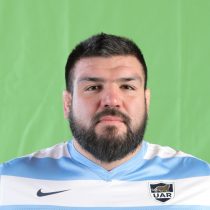 A powerful hard working front rower, Ramiro Herrera broke into the Castres team in 2014 and was rewarded with a call-up to the Argentinian national side for the visit of Ireland.

He played in both tests in the series defeat but was named in the squad for that year's Rugby Championship and has been a part of the squad ever since.

In 2015 he signed for the Jaguares ahead of their debut season in the Super Rugby competition.

His performances in Super Rugby led to his inclusion in the 2015 Rugby World Cup squad where he helped his side finish fourth overall in the competition.

In 2018, Herrera confirmed his move back to France where he linked up with Stade Francais.

His move would have brought an end to his test career having represented his country 38 times but following Mario Ledesma being appointed as the new head coach the policy was changed.

Herrera was recalled into the Los Pumas squad ahead of their Rugby Championship clash with New Zealand in Buenos Aires.