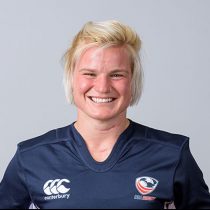 Rachel Johnson picked up rugby when she was 19 at Reed College for extra physical education credit, falling in love with the sport and its culture and seeking out a local rugby club to remain a part of.

As she continued to grow through rugby, Johnson won a National Championship in 2014 with Oregon Rugby and added a Club Sevens Dream Team nomination in 2016. The following year she was the Women's Premier League Top Try Scorer, named to the Women's Premier League Dream Team and even won a National Championship with USA Touch Rugby.

Johnson earned her first cap with the U.S. Women's National Team 15s in November of 2018 against the New Zealand Black Ferns at the Rugby Weekend in Chicago. Her love for rugby has also extended to coaching as she serves as Head Coach of Reed College's program while also pursuing a nursing degree.

She also owns a Bachelors Degree in Community Health.