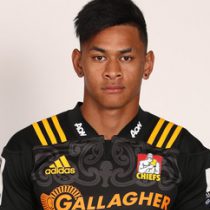 Alaimalo is an Auckland-born outside back, who grew up playing youth rugby for Canterbury. In 2016 he represented Northland in the Mitre 10 Cup, where he showed off his skills and caught the attention of the Chiefs.

He made 8 appearances for the Chiefs during the 2017 Super Rugby season scoring 2 tries in his debut season. He also started in the Chiefs historic match against the British and Irish Lions.

His fine start in the Chiefs jersey earned him the Rookie of the Year Award.

Alaimalo took his Super Rugby form into the 2017 Mitre 10 Cup helping his side to a Championship semifinal. He played every single minute for the Taniwha in 2017 and ranked in the top five of the competition in four categories: carries (116), defenders beaten (44), metres (827) and offloads (21).

In February 2018 Alaimalo signed new 3-year-deal with the Chiefs.

In November 2020, he signed a three-year deal with the Highlanders.

Chiefs 2017 Rookie of the Year