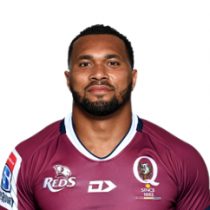 Making history by being the first player to sign for the Rebels from the Dewar Shield, Naivalu had a great debut season scoring 4 tries in his 13 games.

Playing mostly on the wing for the Rebels the big quick Fijian can easily slot into the centres if need be.

He has scored 50 points in 23 Super Rugby appearances since his debut in 2015.

He missed the rest of the Melbourne Rising’s 2017 National Rugby Championship campaign and became unavailable for the Wallabies’ Spring Tour.

Naivalu returned to the Wallabies fold in October 2018 against the All Blacks in Yokahama, where he continued his incredible strike rate in the green and gold – scoring his fifth try in eight Tests.

He again started on the wing in Cardiff for Australia’s opening Spring Tour clash with Wales, before coming off the bench against England at Twickenham in November.

In addition to his prolific try-scoring skills with the Wallabies, the prolific Fijian crossed for 16 tries and a total of 80 Super Rugby points during his four seasons at the Rebels before signing a deal with Queensland Reds in December 2018.