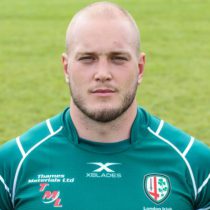 Australian prop Ollie Hoskins joined London Irish from Western Force in the build up to the 2016/17 season. Hoskins has represented Australia at Under-20 level and made 26 Super Rugby appearances for the Force.

Hoskins played 24 times for Irish during the 2016/17 season including an outing in the Championship Final.

Making the move to Irish from Western Force ahead of the 2016/17 season, the 24-year-old English qualified front row has made 32 appearances for the Exiles, signed a new deal with the club in November 2017.

Australia u20, Rugby WA Most Outstdanding U20 Player