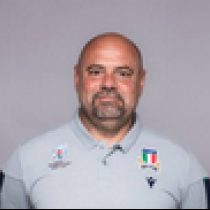 A former prop, De Carli had a playing career spanning over 17 years. Featuring for Roma, Milano, Stade Francais and Calvasiano.

De Carli had his first appointment as a coach at Calvasiano for 3 years. He then shared a brief stint in a joint role as Italy A head coach.

After the role with the A side, he was appointed Forwards coach for Italy in 2014 and retained his role in 2016 after Conor O'Shea was appointed Italy head coach.