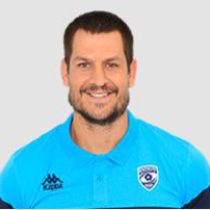 The mountain of an 8th man was chosen to lead the Bulls team after legend Victor Matfield retired. His ball carrying and linking play have improved steadily over the past few seasons and eyes will be on him now as he comes of age.

Spies made his debut for the Springboks in 2006 against Australia in Brisbane.

In 2009, his performances in the Super 14 earned him a selection for the Springboks to play against the British & Irish Lions during their tour to South Africa.

Spies earned a total of 119 caps for the Bulls between 2005 and 2015, before joining the Kintetsu Liners in Japan for one season.

He the joined Montpellier in 2016 signing a two-year deal with the French side.

The 32-year-old was released from his Montpellier contract in May 2017 despite being contracted until next season, after new coach Vern Cotter said Spies was not part of his plans.

In June 2017 Spies announced his retirement from rugby bringing an end to a career that saw him represent his country 52 times.