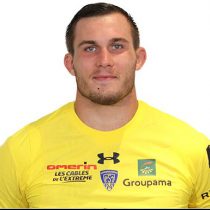 Made his Clermont first team debut as a replacement against Bayonne in Top-14 in September 2013. Started the Top-14 final in Clermont's defeat to Stade Francais in 2015.

Appeared in 18 of a possible 20 matches for France U20 from his debut in the Six Nations in 2012 until skippering them at the Junior World Championships in France in the summer of 2013.

Made his test debut starting in the win over Italy in Paris in the RBS 6 Nations round 1 last year, making four appearances in all. His only cap since was the second test vs Argentina in Tucuman last June.