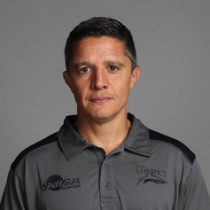 A former Great Britain and England rugby international, Deacon spent the majority of his playing career at Bradford Bulls making 324 appearances for the Club before joining the Wigan Warriors – where he won the 2010 Grand Final and 2011 Challenge Cup.

A Rugby League legend Deacon has been a member of the Wigan coaching staff for four years since retiring from playing in 2011 and also works as assistant to Steve McNamara with the England Team.