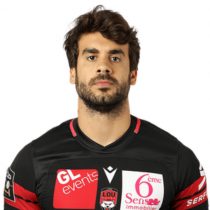 The highly-promising Argentinian out-half made his debut for Clermont in August 2015.

Previously capped twice by Argentina, he holds the world record for points scored at the World U20 Rugby World Cup. He is one of Argentina's brightest young-backs.

His two caps to date have been in the South American Championship.

Injuries hampered his impact at Clermont making it difficult to properly produce on his promise and ahead of the 2019/20 season he signed a deal to join Lyon.