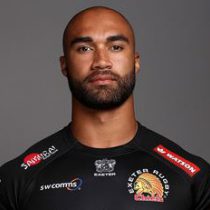 A wing by trade, Woodburn can also operate in the outside centre berth.

A product of the academy system at Bath, Woodburn made his senior debut for the club aged just 19 in October of 2011 against Newport-Gwent Dragons. On his debut he scored a try inside two minutes.

In February 2017, Exeter Chiefs announced that Woodburn had signed a contract renewal with the club for at least two years.

Winger Woodburn, 25, has scored nine tries in 22 appearances this season.