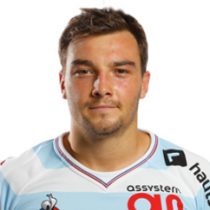 Klemenczak is a Dax academy product, who plays centre and fullback. He has represented France at under 20s and was selected in the 2017 U20 Six Nations squad.

His impressive performances with the U20 & 7s national side as well Dax, caught the eye of Racing 92s scouts and the club side signed the young centre ahead of the 2018/19 season.

In November 2020, he extended his stay at the French club with a new contract extension. Later that month he was called up to the French squad.