Toulon escaped with a 32-29 home victory over Racing 92 in the Top 14 on Sunday despite a tough second half in which they saw two players sent to the sin bin.

The hosts looked to be coasting when they led 29-10 with just under half an hour remaining, but three Racing tries and a second Toulon yellow card set up a nervy finale.

Belleau continued to excel at the start of the second period, while a collapsed scrum meant both Toulon's Marcel van der Merwe and Racing's Vasil Kakovin were sent to the bin.

Racing dealt with the yellow better than the home side and Louis Dupichot crossed, before Toulon were reduced to 14 men again when Stephane Onambele Mbarga was punished. 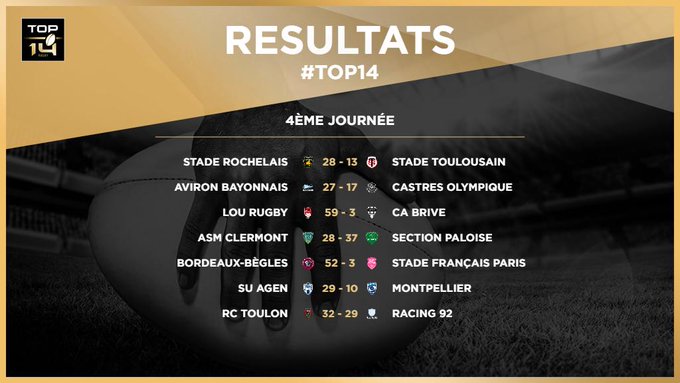 Valentin Saurs and Yvan Reilhac each went through in the first half for Montpellier, but Lagarde's penalties meant Agen led at the interval, and he then touched down seven minutes after the restart.

Agen had been down to 14 men at that stage due to Jamie Taulagi's yellow, but there was no way back and Benito Masilevu capped the scoring late on.