Although slightly low on titles, South Africa has contributed some world-class players to Super Rugby. Here follows a look at an all-star team picked from over the 25 years of the competition's existence.

Greatly admired and respected around the world, “Beast” turned out 159 times for the Sharks over 12 years. A colossus in the scrum and quick and busy around the park, not many come close to matching this man’s capabilities and power.

Du Plessis was instrumental in breaking the mould of the hookers of old. Instead of just concentrating on set-piece, Bismarck expanded his roles to that of fetcher, ball-carrier and enforcer. Bismarck currently holds a lineout success rate of over 90% and his enormous physical strength allowed him to dominate his opponents at scrum and ruck time. Over his Super Rugby career,  du Plessis bagged 131 caps for the Sharks.

A bull of a man, Garvey was a magnificent talent at tighthead. He is one of very few players in the world to have represented two countries in World Cups (Zimbabwe and South Africa). With colossal strength and a suprising turn of pace for a man his size, the Sharks and Cats both drew great reward from his presence in Super Rugby.

A difficult call with the likes of Bakkies Botha in the background; both very similar in temperament and almost identical in size. Etzebeth, however, narrowly edges in Botha in his skill set. Standing 2.03m and weighing 123kg, Etzebeth was made in the mould of a classic bruiser. Even from the tender age of 20, while cutting his teeth at the Stormers, he made his presence firmly known on the field and over the years has built up a reputation as a fierce competitor with an eagerness to intimidate and out-muscle his opponents.

Arguably the best lineout forward ever, Matfield offered a massive advantage in the set-piece. With 148 Super Rugby caps under the belt, the 2.01m second-row became a legend of Loftus Versveld and Springbok rugby as well.

One of the most physical and relentless men to wear the green & gold. Burger consistently performed at a tempo that astonished teammates and opponents alike. Never far from the ball, he cultivated a well-earned reputation as one of the world's top flankers.

Du Toit's performance at the recent 2019 World Cup speaks for itself. It was not an easy call to make with the name of Juan Smith in the back of one's mind, however, leaving out 'PSDT' felt more wrong than right. Having started off his professional career at lock, du Toit was only fairly recently moved to the side of the scrum. The effect the switch would have was delightfully surprising, as the 2m, 120kg giant blossomed into a remarkable player. The most exciting part is that, at 28, he finds himself only now embarking on the best years of his career.

The bulldozing back-rower earning himself the man-of-the-match award in last year’s World Cup final came as no surprise as he continued the marauding assault he has enacted on opposition throughout his career. Vermeulen, standing at 1.93m and weighing 117kg is the complete package with bullocking runs over the advantage line, brilliant skills on the ground, subtle handling and hard, solid defence.

Possibly the most tactically cerebral scrumhalf to have played the game, du Preez was a master at drawing up the blueprint for victory. His cat-like senses of anticipation and attack coupled with his flawless skills made him an enormously valuable memeber of the Bulls and Springboks. 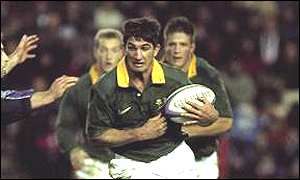 Nicknamed "Lem" (Afrikaans for "blade") in reference to his ferocious tackling ability, Honiball, a quiet man with a beautifully dry sense of humour, epitomised the hard, tough spirit of Springbok rugby. He was as effective on attack as he was on defence; wonderful distribution skills, a useful boot, while also harbouring a knack for slicing through a gap. A 'one-union-man', Honiball played his entire professional career for the Sharks, driving 120km to practice in Durban every day from his farm.

During his Super Rugby career of 118 caps, Habana delighted audiences with his lightning pace and perpetual hunger for the try-line. Once the flyer had kicked into top gear, he was nigh on impossible to stop.

A brilliantly intelligent inside centre and equally effective capatain. De Villiers struggled with knee injuries from early on his career, however, his abundance of natural talent still rendered him one of the world's best, despite losing some pace in the latter part of his playing days.

A typical Springbok "iron-man", Snyman merged brute strength and blistering pace to become a truly superb outisde centre who would rattle the bones of opponents with bruising defence and outstrip them on the field with wonderful running lines and speed. A difficult call between him and celebrated Springbok, Jaque Fourie, however, Snyman's physical presence procured for him a slight edge.

The sight of JP Petersen cantering in behind the try-line became a very frequent one in Super Rugby. The rangy winger had an uncanny ability to ghost and jink his way out of near impossible situations before turning on the gas and burning up the metres.

Although opting to continue his career in France, Kolbe's 49 Super Rugby caps for the Stormers were enough to name him in this team. The young hot-stepper took the world by storm in the Japan 2019 World Cup with amazing displays of competence on the field. Percy Montgomery and Andre Joubert were two other worthy options, but how does one discard the sheer unrivalled attacking brilliance that is Cheslin Kolbe?