Eddie Jones believes England's scrum can be a "real weapon" in their Rugby World Cup clash with Argentina in Tokyo on Saturday.

England sit top of Pool C after two bonus-point victories from as many outings, but the meeting with Los Pumas represents their toughest challenge so far.

Argentina need a victory to boost their hopes of reaching the quarter-finals after slipping to a 23-21 loss to France in their opening match in Japan.

However, Mario Ledesma has decided to leave out fly-half Nicolas Sanchez and keep captain Agustin Creevy – one cap away from breaking Argentina's appearance record – among the replacements.

Pablo Matera will captain the team as Julian Montoya retains his place at hooker after scoring a first-half hat-trick in the 28-12 triumph over Tonga last time out, and Jones thinks Los Pumas may struggle to cope with England's strength in the pack.

"[The scrum] is part of the Argentinian rugby culture so sometimes, like anything in life, you can have dormant periods. But particularly when it's part of your rugby, it's quite easy to reignite and [Ledesma has] done that well," said Jones.

"It's going to be a massive test on Saturday. They haven't scrummed against us yet and we believe our scrum can be a real weapon for us - so hold on to your seats.

"They're an interesting team. A strong team. We know Argentina are at their best at World Cups. Creevy spoke about a few things this week. One of which was how tight they are as a team. And they're a pretty good team if they can get Creevy to come off the bench."

England's front-row options have been boosted by Mako Vunipola's return from a hamstring injury, though the Saracens prop was only named on the bench.

While Ledesma's selection has raised questions, the Argentina coach has no doubt he has picked the right players for a match he made no effort to downplay the importance of.

"In any team, you play because of what you contribute. Thinking about the team and nothing more than the team, we believe these are the best [players] to beat England," said Ledesma.

"We talked to [Sanchez] before we announced the team and it was very hard, but we all know the most important thing is the team and that everyone should contribute.

"It is one of the most important games in the history of this team, but in particular for this group. Los Pumas have had many of these battles and the boys have the opportunity to write their own story."

The Leicester Tigers centre has struggled with injuries but made his mark in the opening game against Tonga with a pair of tries. He will be keen to add more after sitting out the victory over the United States.

With Sanchez left out of the matchday squad entirely, the pressure to perform at fly-half falls to Urdapilleta. He was pivotal to Castres' Top 14 success in 2018 and, with the inexperienced Lucas Mensa the next option on the bench, he must rise to the occasion. 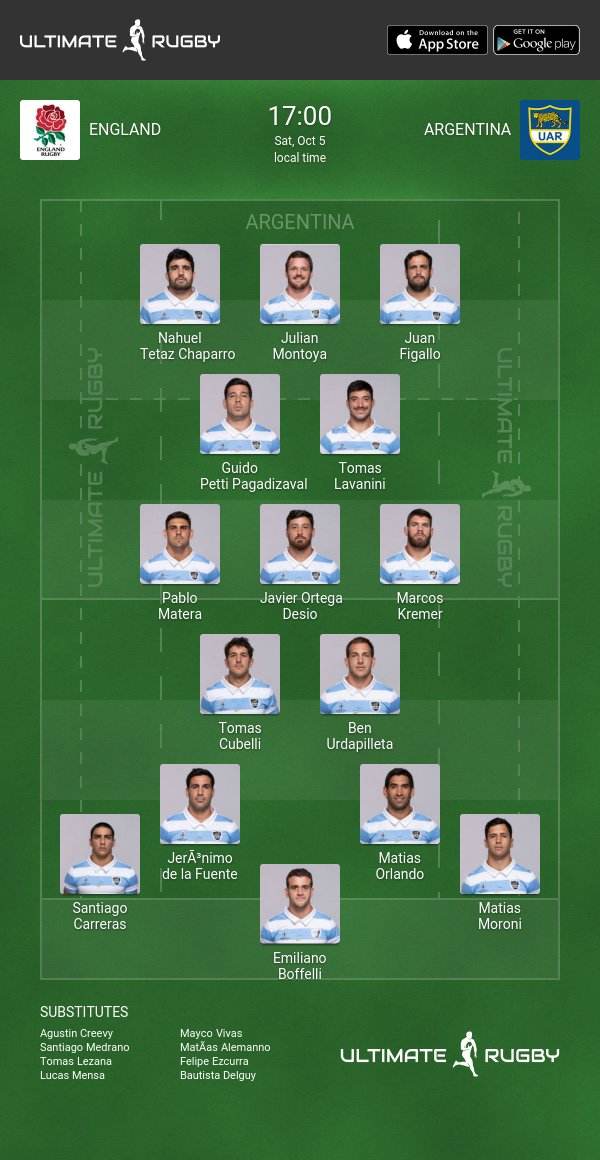 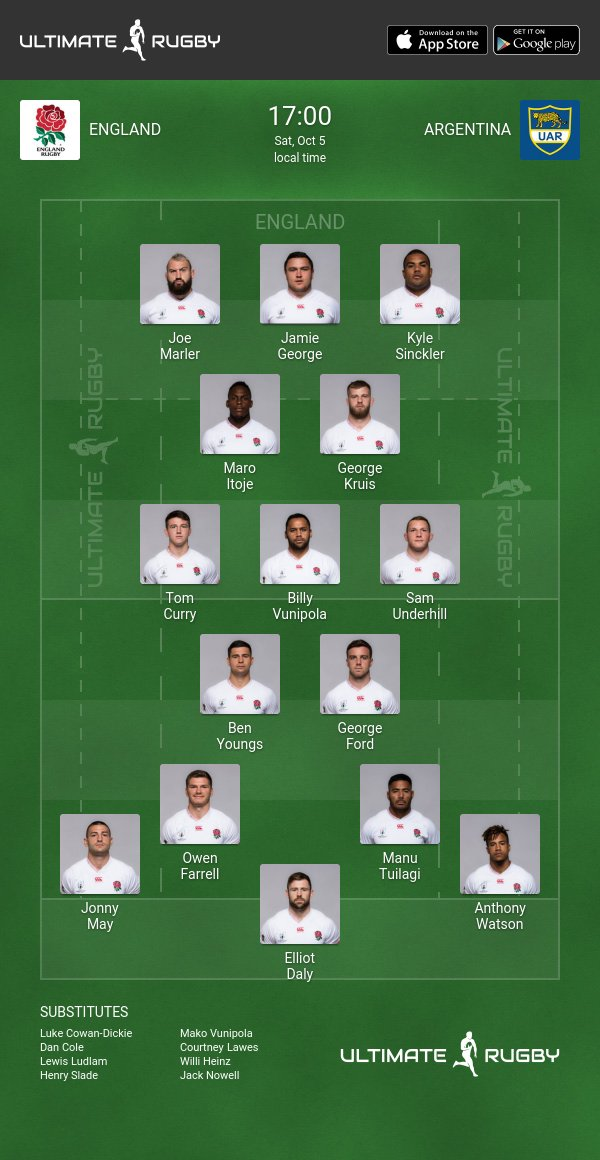 - England have won each of their past nine Tests against Argentina, with their most recent defeat against Los Pumas coming in Salta in June 2009 while the British and Irish Lions were touring South Africa.
- Argentina's win against Tonga in their previous match ended a run of 10 consecutive defeats in Tests, their worst losing run.
- Creevy is set to make his 88th appearance for Argentina, overtaking Felipe Contepomi (87) as his country's most-capped player.
- England have scored 21 tries and conceded just one in their past three World Cup matches, scoring four or more tries in three consecutive games for the first time in the competition.
- Ben Youngs will move third on the list of all-time Test appearances for England with his 92nd cap. Dan Cole will join him if he enters the game as a replacement.