Racing 92 face TOP 14 rivals Stade Rochelais for the first time in the Heineken Champions Cup when they meet in the semi-finals at Stade Bollaert-Delelis in Lens on Sunday.

Neither side have tasted defeat in the last four of the competition, with Racing advancing on three occasions and La Rochelle triumphing on their first appearance at that stage last season.

Racing have won eight of their last nine games in the Heineken Champions Cup, including the last five in a row (excluding cancelled matches). However, their only defeat in that spell came in a knockout fixture against French opposition – 24-21 against Union Bordeaux-Bègles in last season’s quarter-finals. 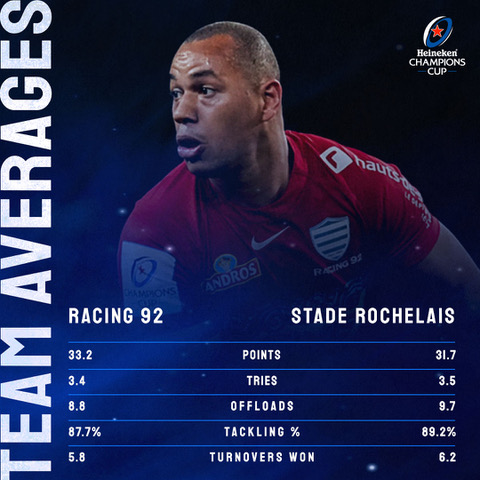 Racing 92 and Stade Rochelais have never met in the European Cup.

Finn Russell (Racing 92 fly-half): “It’s probably going to be even harder. We have already played La Rochelle a few times this year and last year they beat us in the semi-finals of the TOP 14. We know them, we will have to prepare well.”

Grégory Alldritt (Stade Rochelais No.8): “Last year we missed out and we still have a bitter taste in our mouths. We want to get rid of it, so we are more motivated than ever. There are great players who have left us, like Keke (Kevin Gourdon, forced to quit during the season), Victor (Vito), and Jérémy Sinzelle, who is going to leave. We want to end on a high note for these guys.”

Your @DHLRugby Try of the Round winner - Max Spring 🤩