France and Spain have been rewarded for their results in the Six Nations and Rugby Europe Championship this weekend.

Round three of the Six Nations resulted in some changes to the top 10 of the World Rugby's Men's Rankings, with France moving into the top three ahead of England while Wales moved above Scotland.

France ended an eight-year wait for a win at Murrayfield with a stylish 36-17 bonus-point triumph seeing them move ahead of England and sit behind South Africa and New Zealand.

Les Bleus are the only side still in the running for a Grand Slam with their third consecutive victory in the competition boasting their rating by 1.84 points to 87.84 – nearly a point more than England, who only received a fraction over a quarter of a point for beating Wales 23-19 at Twickenham.

Fabien Galthie's charges have New Zealand in their sights, with the All Blacks leading by 0.91 of a point.

In the second Six Nations match of the weekend, Marcus Smith scored 18 points as England defeated Wales 23-19 at Twickenham. Despite the victory, England slip into fourth place, while Wales find themselves higher up the rankings swapping places with Scotland. Wayne Pivacs' side is now ranked seventh swapping places with Scotland, who drop to eighth.

Scotland suffered a more significant points deduction than Wales, which has resulted in their rating falling to 81.75. Wales are now on 81.99 points.

After their 57-6 win over Italy in Dublin, Ireland remains in fifth place.

Over in the Rugby Europe Championship, Spain's 38-21 win over Romania saw them move up two ranks into 15th, swapping places with their opponents. This is Spain's all-time highest ranking.

The win for Spain now sees them lead the race to go into pool B of the 2023 Rugby World Cup. 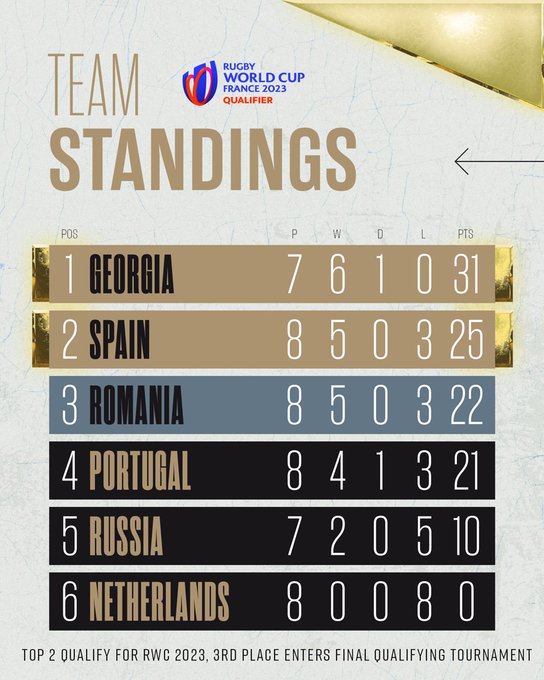