Ireland soundly beaten by Maori All Blacks in tour opener

Ireland's tour of New Zealand has got off to a rocky start going down 32-17 to the Maori All Blacks.

The Maori All Blacks ran in four tries to Ireland's two with captain Bundee Aki and Gavin Coombes dotting down for the visitors.

A touching start to the match saw Aki present the Maori All Blacks and Wainui family with a number 11 jersey ahead of the Haka.

Sean Wainui was a proud Maori All Black and Chiefs star who tragically died in a car crash last October.

Bundee Aki presents the Maori All Blacks with a jersey for the late Sean Wainui pic.twitter.com/bkMOmJUa3Q

Andy Farrell's side were not only soundly beaten but looked to have lost at least two players for the test matches against New Zealand.

Prop Jeremy Loughman had a HIA in the opening minutes before permanently leaving at half-time while centre James Hume, outside back Jimmy O'Brien, and prop Cian Healy all hobbled off the pitch. Healy's ankle injury looked particularly uncomfortable.

The hosts scored all four of their tries in the first half with Bundee Aki scoring at his old stomping ground with the Chiefs - Ireland trailled 32-10 at the break.

Gavin Coombes scored the only try of the second half as Ireland produced a far better performance in the second keeping the hosts scoreless as Josh Ioane and Ruben Love both missed shots at goal.

Ciaran Frawley scored the first points of the match off the back of a Cian Healy scrum penalty after the veteran prop was an HIA replacement for Jeremy Loughman. Josh Ioane would level things up soon after with a penalty of his own.

A missed placed kick from Jimmy O'Brien countered by a wonder 50:22 from Maori All Blacks fullback Zarn Sullivan with the hosts making the most of the chance from the ensuing lineout. They shifted the ball into the midfield before swinging back onto the blindside where Sullivan found his way over the line.

Ireland hit back through Bundee Aki with no.8 Gavin Coombes tipping a pass on after the lineout to the rampaging centre who crashed over.

Frawley's conversion edged Ireland back in front but lead did not last long as Josh Ioane nailed his second penalty.

Zarn Sullivan kicked started the host's second try as he plucked a high ball out of the sky. From there, they shifted the ball wide with Josh Ioane slicing through the defence and sent Shaun Stevenson away down the flank. The Chiefs' speedster beat the cover defence to finish off the chance.

Brad Weber also got on the scoreboard after Tom O'Toole slipped on his try line opening a gap for the scrumhalf to snipe over.

It was Sullivan who kick-started his side's fourth try, this time he cooly collected a kick into the backfield and offloaded to Shaun Stevenson. The winger coasted through a gap in the chasing Ireland players and through an awkward pass out to Billy Harmon. The flanker managed to volley and regather the pass before drawing the last defender and put Cullen Grace through to score.

The Maori @AllBlacks will punish you pic.twitter.com/149fIMgtKF

Ireland came out firing in the second half but were unable to make the most of their opportunities as they were held up over the line on three occasions.

Things just got worse for Andy Farrell's side as James Hume was forced off the pitch and Jimmy O'Brien followed soon afterwards. 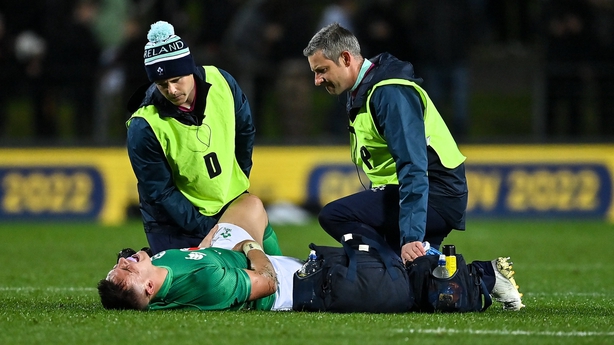 The pressure on the Maori All Blacks' line finally told with 15 minutes left to play as Coombes forced his way over after a tap-and-go near the line from Niall Scannell, who linked up with the squad earlier in the week as injury cover.

Frawely added the extras in what would be the final change to the scoreboard. Ruben Love had a shot at goal canon off the upright and attempted a drop goal which sailed wide meaning that the game would end 32-17 in the Maori's favour.