Despite injury troubles, Nottingham welcome back hooker Ben Brownlie to the starting line-up and Sam Lewis, who was substituted half an hour after replacing Llewelyn Jones last weekend, also starts. Dual registered second row Devante Onojaife will join Lewis in the Green and Whites’ pack. 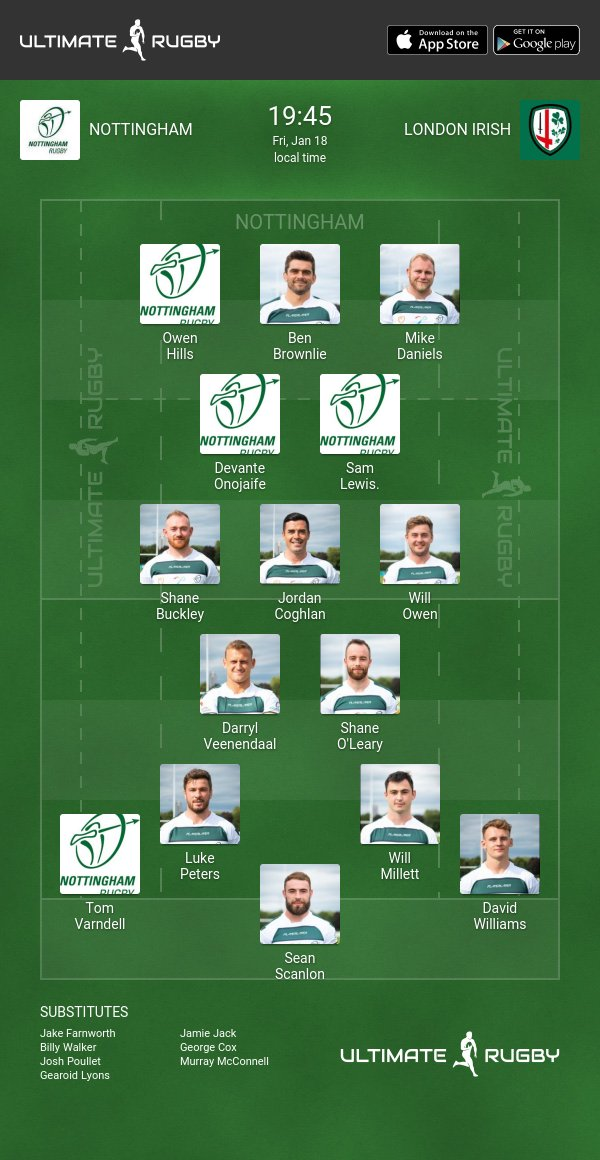 Fresh from his brace against Richmond, Dave Porecki retains his starting place at hooker. Scotland international Gordan Reid and the explosive Ollie Hoskins accompany Porecki on either side on the front row. 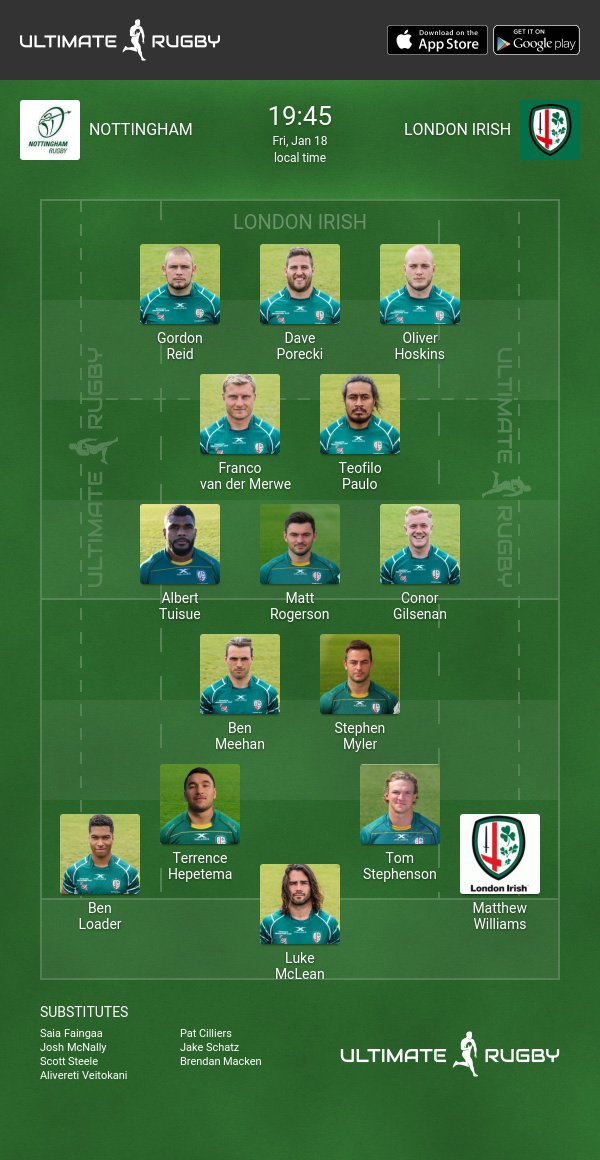 With barely room for a cigarette paper between them in the Championship table, Jersey Reds and Bedford Blues look set for a memorably close contest when they lock horns this Saturday.

Reds Head Coach Harvey Biljon makes three changes to his starting XV. Two are in the backs, with Jason Worrall stepping up at wing after an injury to Koch Marx, and Aaron Penberthy coming in at fly-half for Brett Herron, who took a knock in training this week. And there's rotation in the front row, with Roy Godfrey starting and Harry Morley switching to the bench. 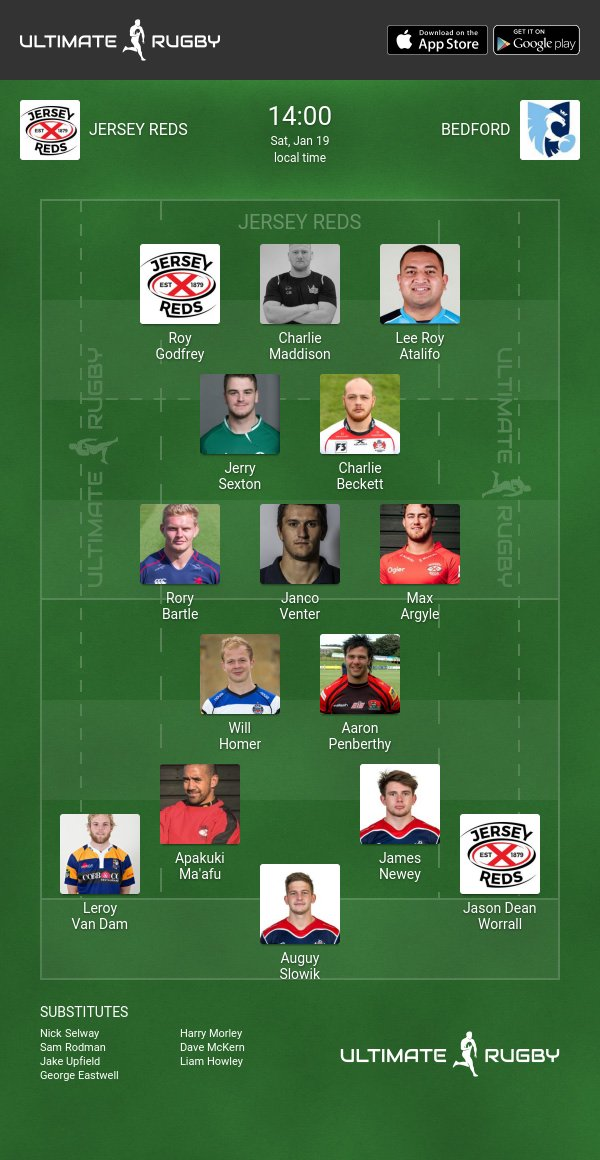 Northampton Saints youngster Matt Worley has signed on dual-registration and comes straight in at 13 with Lewis Robling moving to fly half to cover the injured Will Hooley. In the forwards, Charlie Clare returns at hooker, Will Carrick-Smith comes into the second row and Justin Blanchet - who was called up to the Canada squad this week - replaces Oli Curry who suffered a knock against his former club last Saturday. 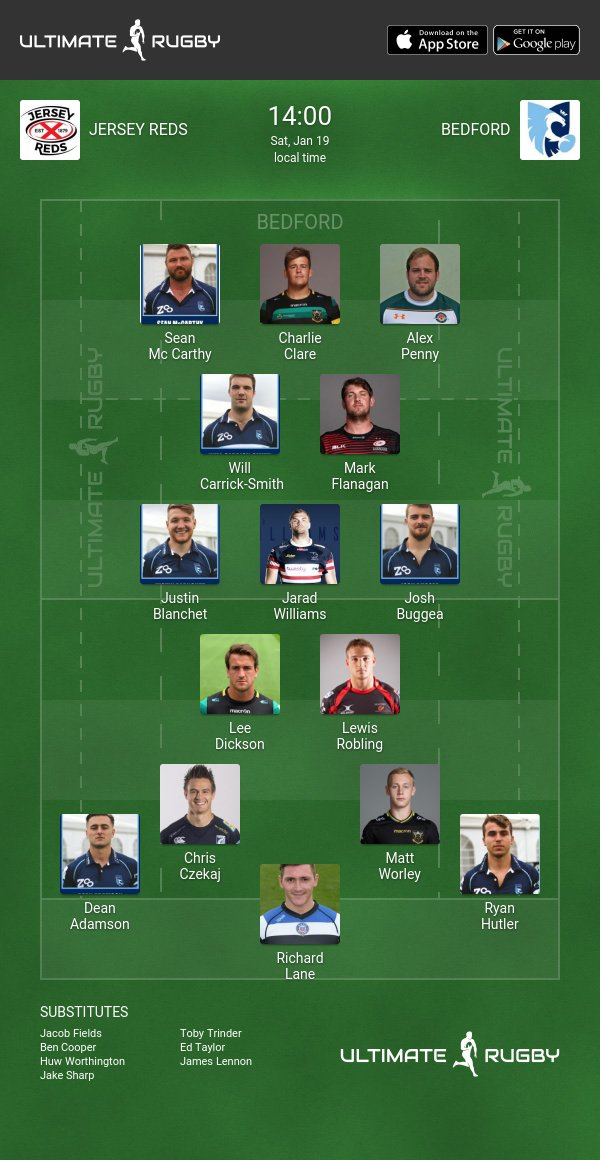 Hartpury have made five changes to their starting line-up for the visit of Doncaster Knights to the Gillman’s Ground, on Saturday.

Mike Wilcox returns to the full-back jersey, with Ben Foley switching back to his duties in the right wing.

The only other change in the back division is at scrum-half, where Richard Bolt replaces the absent Charlie Chapman.  Jamie Forrester and Luke Eves swap shirts in the centres. 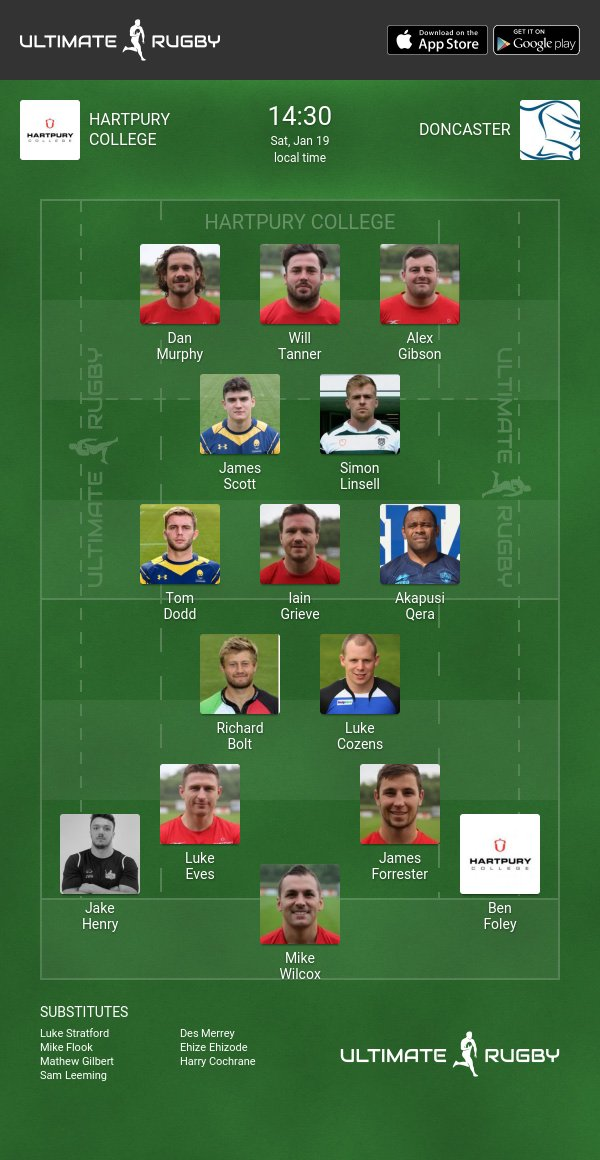 Doncaster have several players out injured with Michael Hills (groin) and Steve McColl (ankle) been withdrawn early from the game last weekend.

Cameron Cowell returned to training this week and enters the starting line up. Tom Calladine is also set to start after a lengthy time out injured, the flanker made his return on Saturday and will make his first start since early October. 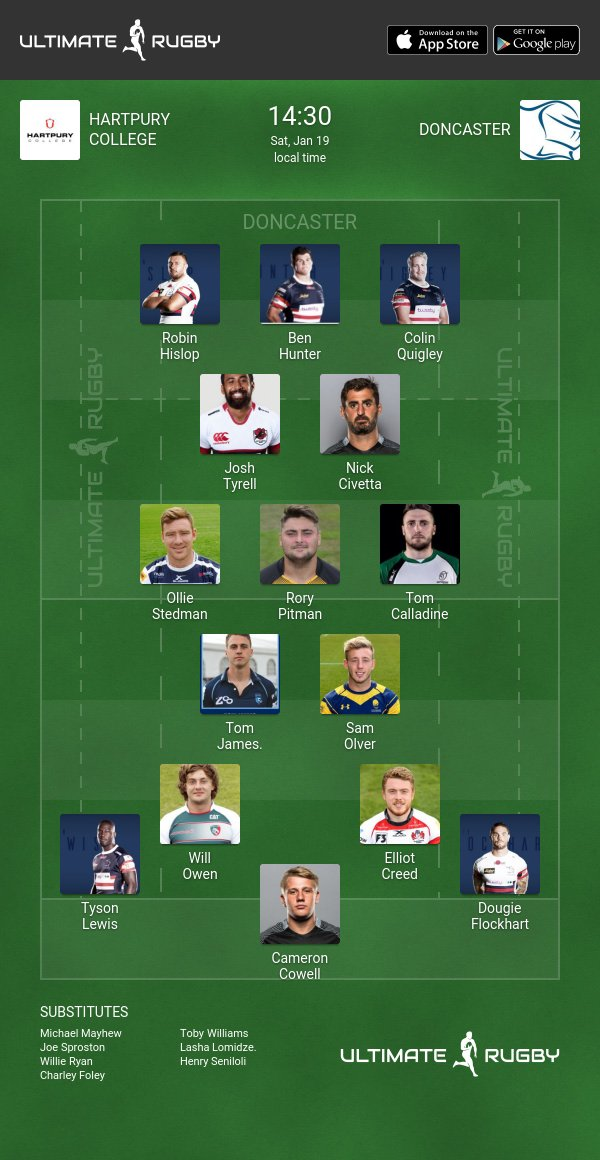 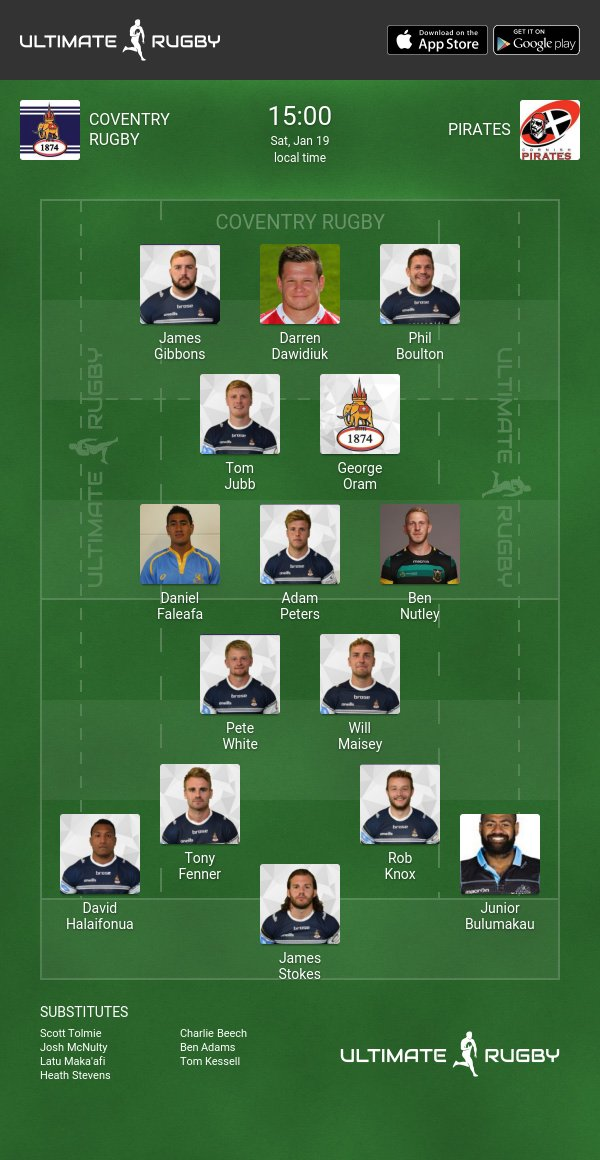 In a team keen to bounce back from their defeat at Yorkshire Carnegie last Sunday, lock Toby Freeman, who has been an all but ever present and hard-working performer since signing for the Cornish Pirates in 2017, is set to make his 50th appearance.

The Pirates welcome back wing Robin Wedlake from injury, whilst at fly-half Javier Rojas Alvarez is named. He was used early as a replacement last week following an unfortunate injury to Will Cargill. 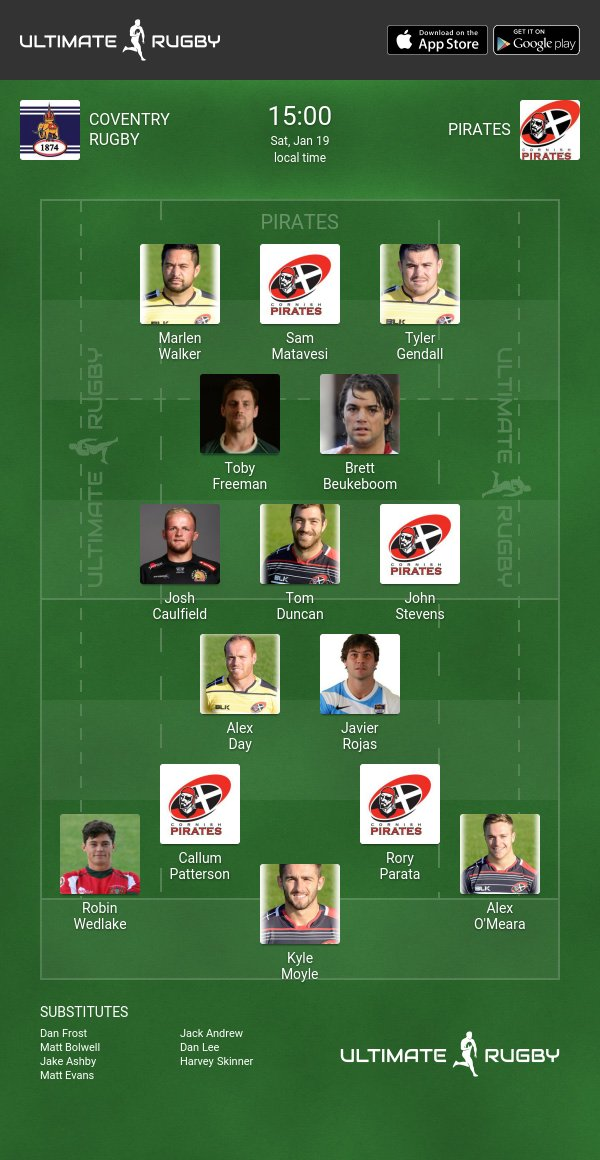 Ealing Trailfinders' starting line-up features seven changes from the team that were defeated by Bedford Blues last weekend with a number of alterations to the pack and the back-line as the coaches ring the changes for the visit of the Exiles.

Alex Lundberg is rewarded for a dominant performance as a substitute last weekend and gets a start at loose-head, with Alun Walker and Mark Tampin joining him in the front-row. Ben West returns to the second-row alongside Harry Casson, whilst Ben Landry comes in to the back-row next to Rohan O’Regan and Captain Rayn Smid.

Ryan Foley is back at scrum-half with Craig Willis as his half-back partner, and a new-look centre pairing of Harry Sloan and Lewis Jones will be aiming to make their mark in the midfield. 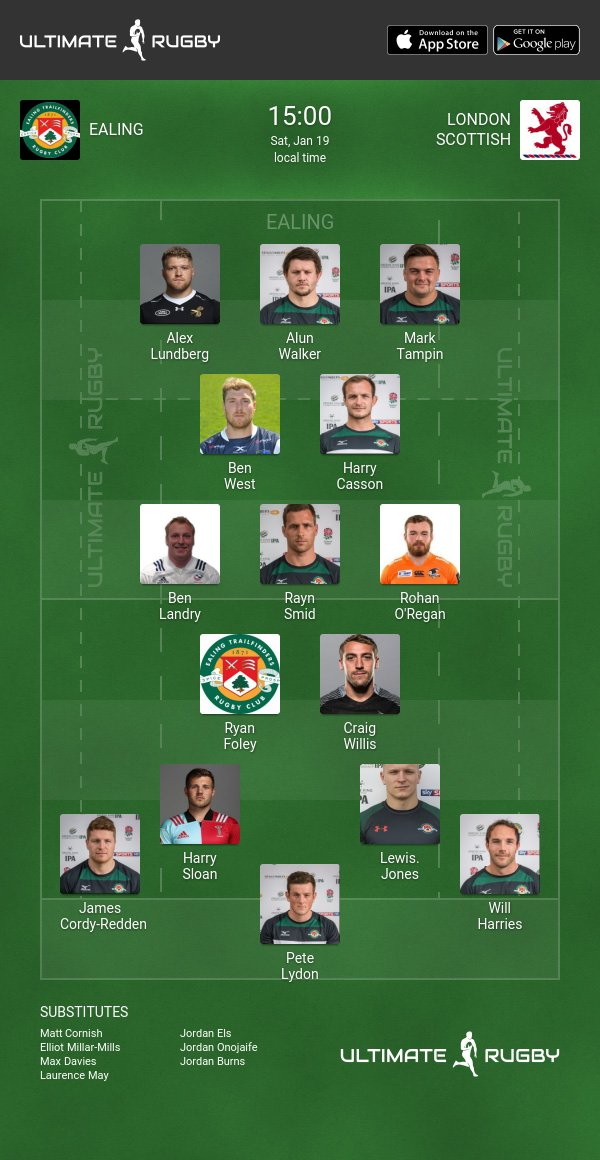 The Scots go unchanged in the most part after securing their first win of 2019 last Friday over Hartpury College. 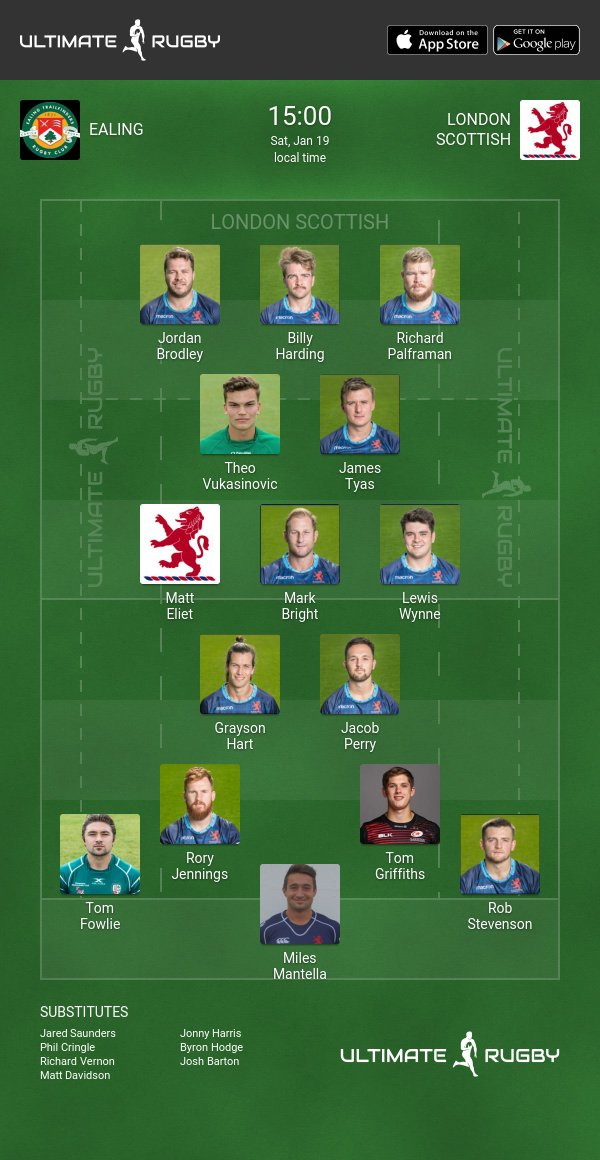 In the backs, Richmond have made four changes from the side who travelled to Irish, with the half-backs and full back spots the only trio to remain. Ben Rath and Sam Edgerley come back onto the wings, while Cam Hudson has had no shortage of game-time at 12 this season, and he once again comes back in to bring power to the midfield. Outside him, Morgan Ward has impressed on his handful of first team outings, and he will be looking to fill the void left by Cheeseman’s absence. 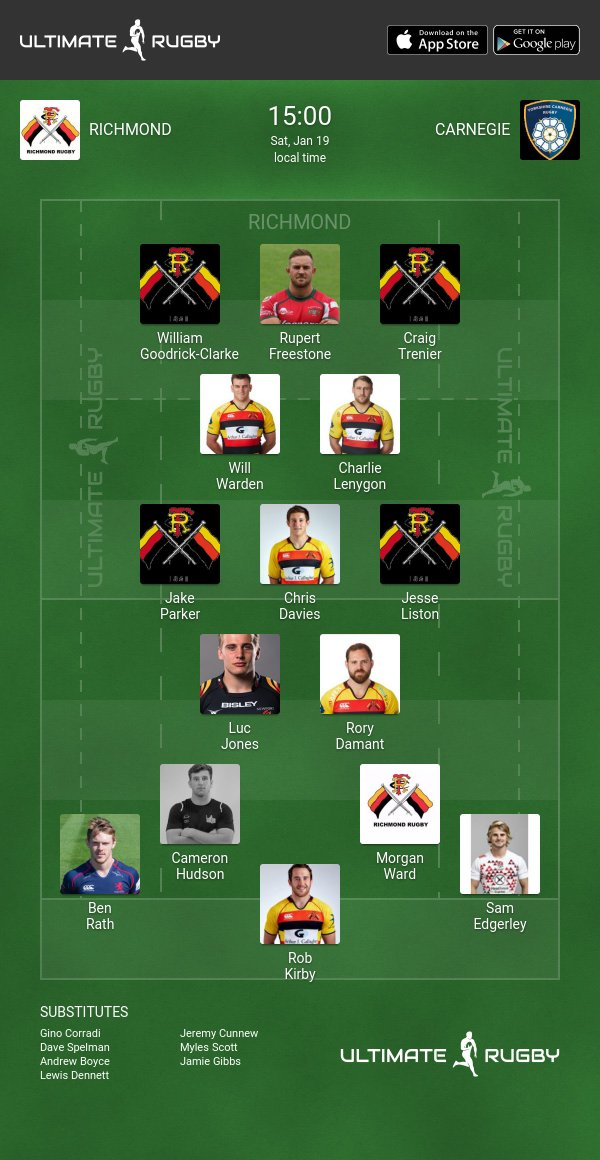 Yorkshire Carnegie Director of Rugby Chris Stirling has made six changes to his starting line up for this Saturday's Greene King IPA Championship clash with Richmond at the Athletic Ground.

Two of the changes come in the back line with George Watkins replacing Elijah Niko whilst rising star Sam Wolstenholme starts at scrum half ahead of JB Bruzulier.

In the forwards, Nic Mayhew makes his full debut having come on as a replacement in last week's win over Cornish Pirates at Emerald Headingley. At tight head Andy Foster swaps places with Craig Mitchell, who is a replacement this week. 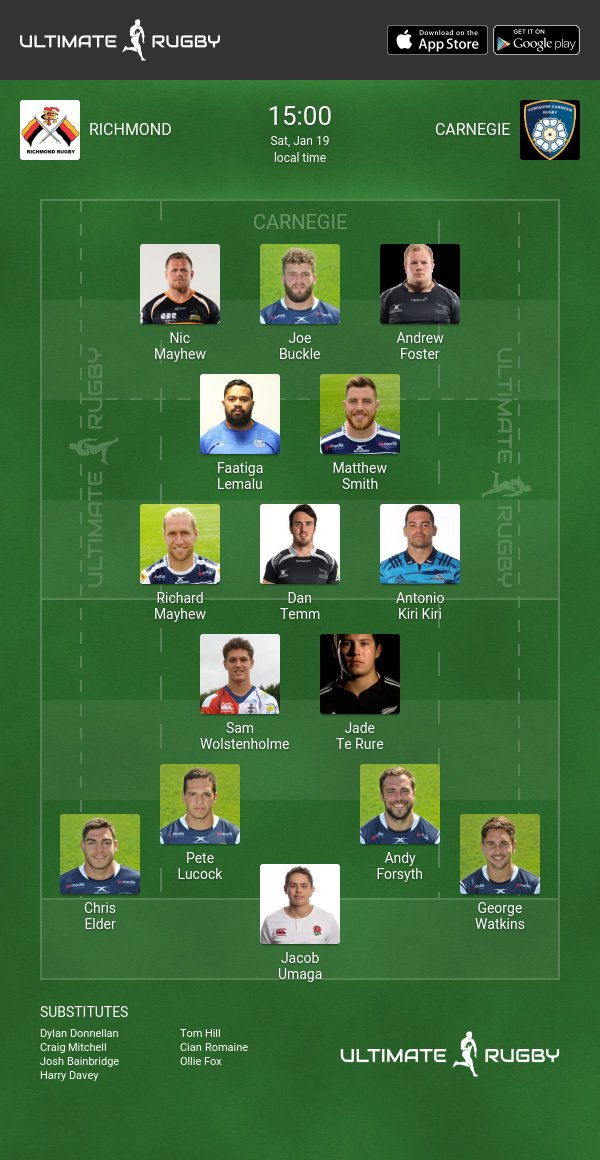