Munster host Benetton Treviso while Ulster and Connacht clash in the PRO14 quarter finals this weekend with Leinster and Glasgow Warriors having already booked their places in the semi-finals.

Here is the team news ahead of the weekend.

Peter O’Mahony captains Munster with three changes to the team that defeated Connacht last weekend as Rory Scannell, Keith Earls, and Conor Murray come into the backline. Mike Haley starts at full-back with Andrew Conway and Earls on either flank while Scannell and Chris Farrell pair up in the midfield with Murray and Tyler Bleyendaal in the half-backs.

Dave Kilcoyne, Niall Scannell and Stephen Archer pack down in the front row with Jean Kleyn and Tadhg Beirne start in the engine room with O’Mahony, Chris Cloete and CJ Stander completing the side in the back row. Joey Carbery misses the clash through injury.

Meanwhile, Kieran Crowley has recalled Tavuyara and Zanon after their respective injuries and has made four changes in total compared to the XV that took to the field last Saturday against Zebre.

Jayden Hayward starts at fullback and is flanked by Ratuva Tavuyara and Monty Ioane. Marco Zanon and Luca Morisi form the midfield with Dewaldt Duvenage at scrum half and captain Tommaso Allan at fly-half.

The front row will consist of Nicola Quaglio, Luca Bigi and Marco Riccioni. Locks will be Marco Lazzaroni and Federico Ruzza. Finally, the back row sees Sebastian Negri, Braam Steyn and Toa Halafihi completing the XV

Rory Best and Darren Cave are set to make their final appearances at Kingspan Stadium on Saturday after being named in the Ulster squad for the PRO14 quarter-final against Connacht.

The duo, who have made a combined total of 446 appearances for Ulster to date, have both announced that they will retire from club rugby at the end of the current season.

Best has returned from injury and will captain the side at hooker and is joined in the front row by Ross Kane and Eric O’Sullivan, while Iain Henderson and Kieran Treadwell will provide grunt from the second row. A loose forward combination of Nick Timoney, Jordi Murphy and Marcell Coetzee has been selected.

John Cooney and Billy Burns are re-instated into the half-back positions, with Stuart McCloskey and Luke Marshall partnered in midfield. Academy players Michael Lowry and Robert Baloucoune will line out in the back three alongside Rob Lyttle.

For Connacht, Jack Carty returns to form a half-back partnership with Kieran Marmion, with Caolin Blade named among the replacements.Elsewhere in the back line, Tom Farrell comes back in to partner Bundee Aki in midfield and there is one change in the back three from the side that played Munster last weekend with Matt Healy returning to the wing. Stephen Fitzgerald keeps his place on the opposite wing with Tiernan O’Halloran at full back.

Up front prop Denis Buckley returns to the side as does hooker Dave Heffernan. Tighthead Finlay Bealham showed no ill effect of his recent hand injury last time out and he retains his place in the front row. In the second row Irish International Ultan Dillane will partner Gavin Thornbury.

In the back row, Colby Fainga’a is the only change as he comes in at openside with Captain Jarrad Butler switching to number 8, while Eoin McKeon is named at blindside. 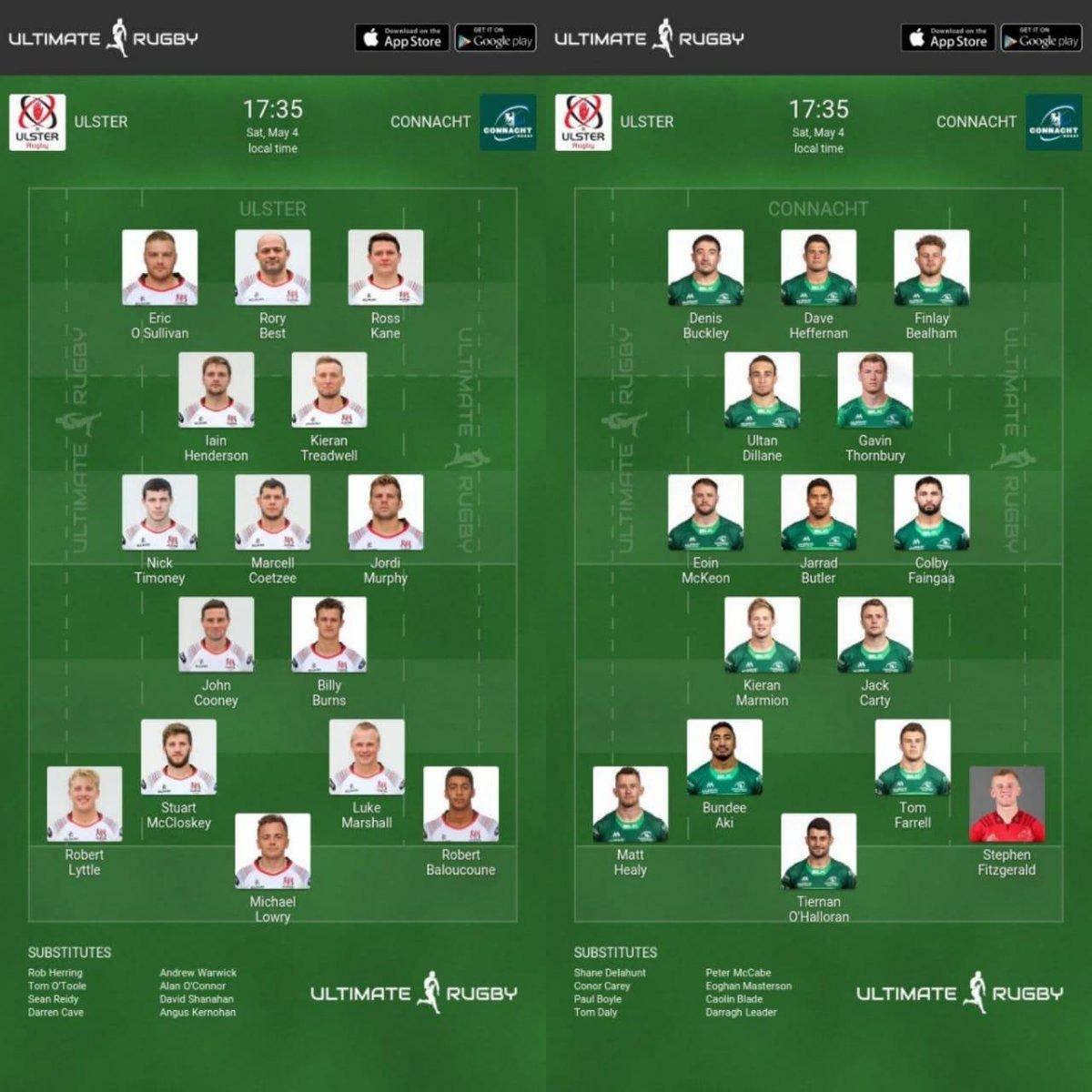