25 years of Super Rugby have produced some stars from Down-Under. We had a crack at selecting an all-time greatest team from the wealth of talent available. 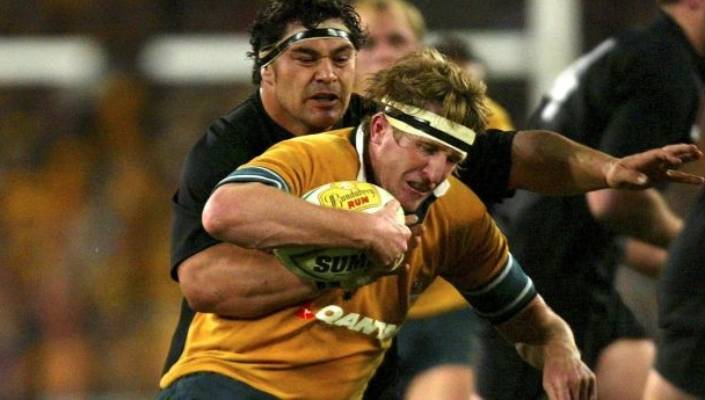 Young played over 100 games for the Brumbies over his career. A talented loosehead with an above-average work-rate.


One of the pioneers of the new mould of hookers, New Zealand-born Paul was a versatile, prodigious talent who became a great attacking and defensive force all over the field.

Slipper started out as a loosehead before it was decided that his abilities suited the critical tighthead role. A all-round great servant of Australian rugby, he has racked up 105 Super Rugby caps.James Horwill

One of the few Australians to have hoisted the Super Rugby trophy in the air, Horwill has proved himself to be a fantastic player and leader from the second-row. Over 9 years, he garnered 116 caps for the Reds.

One of the few Australians to have hoisted the Super Rugby trophy in the air, Horwill has proved himself to be a fantastic player and leader from the second-row. Over 9 years, he garnered 116 caps for the Reds.

One of the true legends of Australian rugby and a great ambassador for the game. Eales’ nickname during his playing days was ‘Nobody’... because ‘nobody’s perfect’. A brilliant lineout forward and leader (not to mention his goal-kicking ability), he earns his spot with aplomb.

One of the toughest most skilful men on the ground men on the game has seen. The blindside role was a staunch contest between Pocock and Owen Finegan, however, the former stole it with his stealing ability and red-blooded commitment.

Smith was an ever-present threat to opposition continuity and cohesion. Courageous and intelligent, he became a master at stealing ball, routinely putting his body on the line while employing a near perfect technique. With 164 Super Rugby caps, Smith is an iconic figure in Australian rugby and one of the best, consistent and most menacing flankers in the game’s history.

A truly powerful force at the back of the Wallabies’ scrum, Kefu is largely unrivalled in his selection here. A cerebral player who put his body on the line time and again with storming runs and cracking defence.

Gregan’s contribution to Australian rugby is unparalleled. With 139 international caps, he is remembered as one of the greatest scrumhalves to have passed the rugby ball.  In Super Rugby, Gregan won 136 caps for the Brumbies and excelled in all facets of the game.

A brilliantly-skilled fly-half, his combination with George Gregan was iconic. Originally a fullback, Larkham’s ghostly stepping ability took him right to the top, eventually being employed in the number 10 channel to great effect.

A truly sublime finisher, when Roff was given the ball, he knew exactly what to do. Great pace and footwork skill saw him cross the try-line many times, often creating tries out of nothing, all with a characteristic air of nonchalance.

A superb player who produced innumerable moments of attacking genius, Horan is arguably the greatest centre Australia has ever produced. With him in the backline, the Queensland Reds were a formidable force to be reckoned with as he made a habit of tearing defensive systems to pieces with great pace, hard running lines and fine handling skills.

Mortlock represented Australia at U19 and U21 level before starting a Super Rugby career which would see him rack up 140 caps. Mortlock was a hard-running, hard-tackling player who ruled the outside centre channel with an iron fist, producing more than his fair share of moments of brilliance while doing so.

Hard, strong and fast, Ashley-Cooper was a livewire in the outside backs who often proved himself to be unstoppable. His skill and talent earned him a massive 154 Super Rugby caps.

The rangy fullback showed sublime talent during his days in Super Rugby. He was unmatched in the air, routinely plucking high balls at full pace and exhibiting fantastic finishing skills. A truly superb athlete who was dangerous every time he touched the ball.