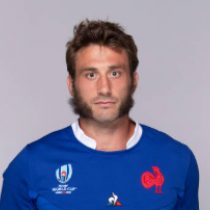 A fiercely fast winger, his speed was illustrated on the main stage when he was called to play at senior level for Toulouse in 2004. Medard made his French debut in 2008 against Argentina. His agility and unpredictability make him an exciting player to watch and a danger to play against.

In June 2016, Medard was part of the France 28-man squad for their tour of Argentina.

Medard, named for the 2019 Six Nations squad has had 21 previous 6 Nations appearances scoring a total of 35 points.