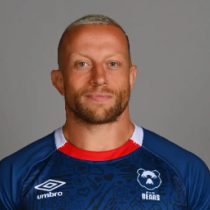 Born in London, Lahiff started his career at London Irish, making over 50 appearences in 4 years.

In 2013 he moved to Hawke's Bay and then on to the Rebels in 2014 where he was also a member of the NSW Country Eagles side that played in the NRC.

In 2015 he signed a deal with Bath, his strong scrummaging & good technique were what then coach, Neal Hatley, spoke of after announcing the move.

Only days after being announced as a Bath player, Lahiff scored against Ospreys on his debut at the Rec. After a chain of favourable performances, Lahiff re-signed for Bath for a further 2 years.

In July 2019, Lahiff signed with Clermont as cover for the Rugby World Cup, having played over 100 Premiership matches, however, the deal was abandoned due to a medical condition. He then signed for Bristol Bears.